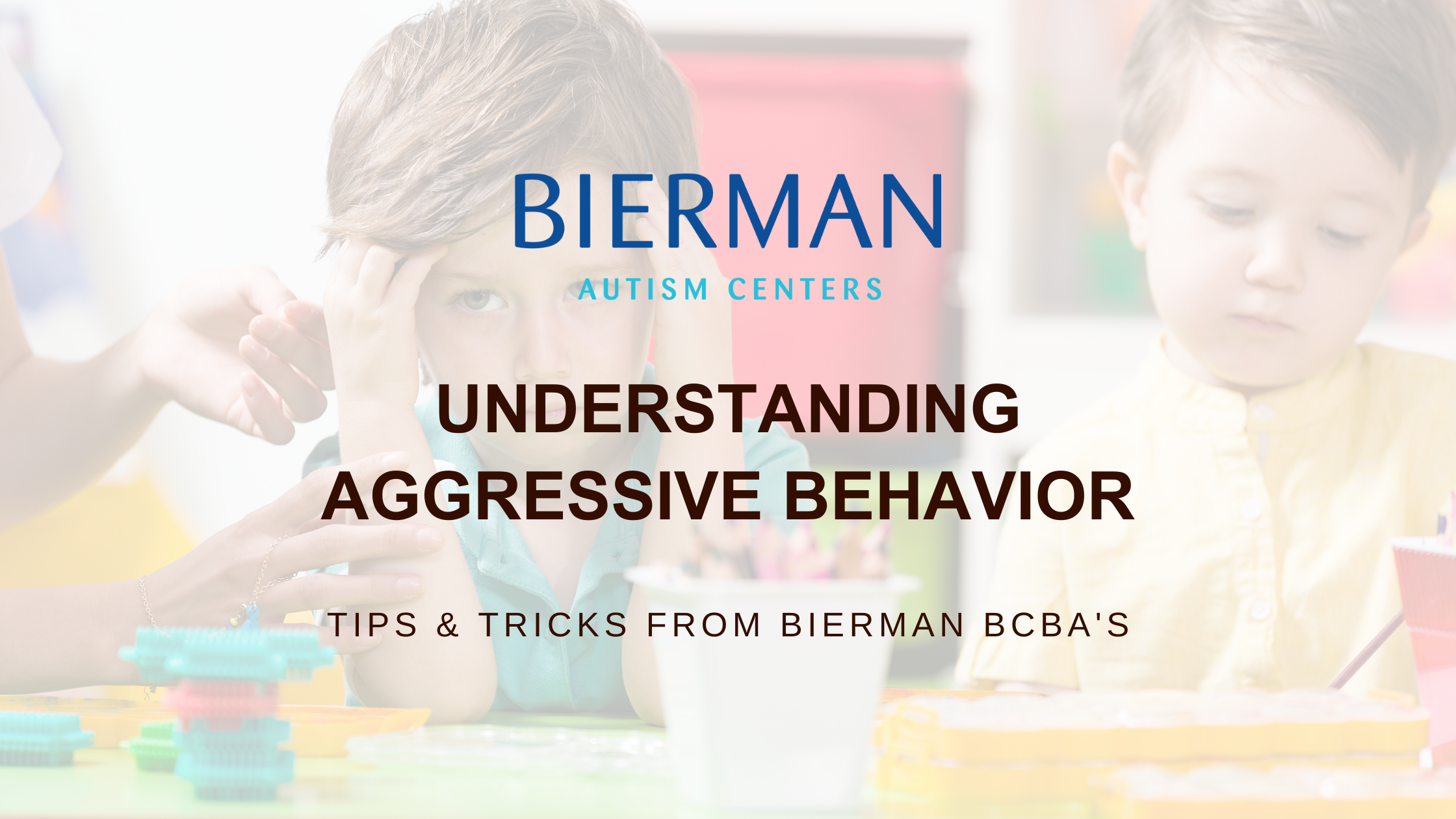 Children with autism can often engage in forms of aggression such as hitting, biting, pinching, kicking, throwing objects, head banging, pushing, pulling, or spitting. Children may engage in these behaviors to hurt themselves or hurt others.

It is often misunderstood that it is a childs “autism” that is causing problem behavior, but this is not the case. Children with autism often have difficulty communicating with others and become frustrated. Aggressive behaviors then become a way for the child to communicate. The child may want something such as a drink, snack or help with a difficult activity if frustrated.

1. A child may aggress to communicate he or she wants something (toy, activity, attention)

2. A child may aggress to escape or avoid something unpleasant to them (asked to do something they don’t want to do)

An example of this might be if a parent asks a child to pick up his toys and go to bed. The child may act out because this is something he or she might not want to do. If the demand is revoked and the child is allowed to continue playing and stay awake, the child thinks “I don’t want to do this, and if I throw a tantrum, it makes you stop”. In addition, removing the demand to avoid the tantrum is reinforcing to the parents.

3. A child may aggress to produce self-stimulation

In some cases, aggression may also serve as a form of self-stimulation in which the action just “feels good” to the child.

For example, a child may bang his chin with his fist frequently when alone. In this case, the child may have too few appropriate leisure skill activities, such as appropriately play with toys and other activities. Instead, the child engages in self-stimulation as a form of entertainment and serves as an enjoyable sensation the child can produce alone.

4. In other cases, the aggression may be due to a medical condition in which a medical Dr. should be consulted and the child treated. Medical issues should also be ruled out first.

Once aggressive behaviors are occurring frequently, they can be difficult to decrease right away. This is where we can help! Here are some tips to help reduce aggression or other forms of problem behavior.

1. Identify the cause or function of the behavior. (Be sure to rule out any medical reasons first) Is the child engaging in problem behavior to:

• Access a toy, activity, or attention?
• Escape or avoid something he or she doesn’t want to do?
• Produce self-stimulation because the aggressive behavior “feels good”?
• Possible medical issue?

2. Stop reinforcing the behavior. If a child cries or hits because he wants a toy when at the store, then don’t give the child the toy. If he cries or hits because he doesn’t want to stop playing and go to bed, don’t allow him to keep playing and avoid going to bed. If he is engaging in the behavior to produce self-stimulation, teach a “time and a place” for the behavior or find another item or activity the child can do instead which looks more appropriate but produces the same desired “feel”.

3. Teach your child more appropriate ways to communicate. For example, begin to teach your child to ask for a toy or activity using ASL sign, words, or even by pointing through the use of a picture system.

Parents can consult an experienced BCBA to help identify reduce aggression and teach more appropriate replacement behaviors. A BCBA can help by performing a functional assessment to identify the function(s) of behavior and design an individualized behavior plan to help.